Taxes Can Greatly Affect Our Ability to Preserve Wealth

Understanding how taxes impact your ability to build wealth is essential. While it would be impossible to operate our country without some level of taxes, it is in our best interest to reduce or legally avoid them wherever possible.

In order for you to have an idea about where taxes might be going in the future you need to know where tax brackets have been in the past. 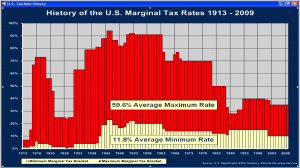 This graph is the history of the marginal tax rates from 1913 when the income tax code was first implemented through 2009.

As you can see, the initial tax bracket was only about 7% and it applied to a very small segment of the population. Tax brackets increased dramatically around 1917 and stayed above the 70% level for several years. The reason for this dramatic increase was our country’s involvement in the First World War. Taxes were increased to help fund the costs associated with that war.

While taxes did drop after the war they did not go back to 7%, they only fell to around 25% for the next few years. Beginning in 1931 tax rates were on the rise and remained higher for the next 30 years as the country struggled to pay for the welfare projects of the great depression and World War II.

It is important that you understand that the tax graph you are looking at is a graph of the highest marginal tax brackets. For example, in 1943 and 1944 the marginal tax brackets reached an all-time high of 94%. That doesn’t mean that people had to give the government 94% of their income, it means that, depending on how much they earned, the amount above a certain level would be taxed at 94%. The point in all of this is that for approximately 60 of the last 90 years, the highest tax brackets have been 50% higher.

Tax brackets have been relatively low for the last 20 years, in part this is a result of the government eliminated a number of our deductions. The past could be a sign of the future as it pertains to taxes.

What Does This Mean for Our Future?

We are looking at a financial future in which our government will have to fund a number of entitlement programs, such as Social Security and Medicare being the largest. These programs are going to require a significant increase in taxes for a very long time, primarily due to the significant number of Baby Boomers who have started reaching retirement age.

Now that you have a better understanding of tax brackets and have seen the history of what the government has done when they need money you can begin to predict what will be happening to us from a tax standpoint.

How Can a Family Banking Plan Help?

First of all, we bring these statistics up not to scare you, rather to inform you of what may happen very soon in this country. Now more than ever, it is vital that you understand the impact of this great wealth destroyer and protect your assets from as much of this as you can. There are strategies that you can apply in your life that are safe and legal ways for you to guard yourself against excessive taxation.

The Family Banking Plan is one such way, we are very aware of the taxation each of us faces and can help you understand ways to protect your assets.

To find out how we can help you keep your hard earned money please complete the FREE Wealth Transfer Analysis!

How Demographics Affect Your Retirement Plan

Financial Fortune Telling Can Work For You

You Finance Everything You Buy

How the Family Banking Plan Gives You Control of Your Money

You Finance Everything You Buy

Financial Fortune Telling Can Work For You